We sat outside in the annex to have breakfast and got our daily visit from the Mother Kangaroo and he Joey – they are very cute. But they were rummaging around in the annex trying to find food, so they headed off once it was all out of their reach.

We planned to take the boat out today and try fishing the bay. We are waking up early and going to bed early – both because of the time change to the WA timezone and also switching gears to holiday mode. So we were up reasonably early and got the boat and rods organised. It always surprises me how much planning there is to do for a day’s fishing! There is only the option to beach launch here, so off we went.

It was a bit of a battle putting the boat in, but a lovely guy wandered over to give us a hand, which was very much appreciated. The trailer tyres were instantly sinking in the wet sand. There was also a bit of a swell that was making it difficult for me to hold the boat in the water while Col moved the car and trailer and again the kind man stayed to give a hand. We finally headed out into the bay, but it is a little challenging for Col to work out where to fish in unfamiliar waters, and also to know what rig to use if you don’t know what fish you will be catching. We went out of the bay initially but it was about 40m deep and big swell. I was feeling a little anxious and Col thought we should head back into the bay and see what we could find. We started fishing at the head of the bay and caught some Rosy Parrot Fish and a type of Wrasse, but none of them are good eating fish, so we put them back. We then went squidding with hand reels and squid jags and managed to catch a couple of good sized squid.

We headed back into shore and that was where the fun began, and I use the term ‘fun’ very loosely! Col dropped the boat and me at a sheletered part of the bay away from the swell and went to grab the car and trailer. I turned the boat to face the small waves coming in and held it while he started backing the trailer in. The seaweed on the beach prevented Col from being able to push the trailer into the water, so he jumped in the car and had to move the trailer. When backing up the trailer it fell off the towball and Col ran over the top of the trailer. I was busy concentrating on keeping the boat facing the waves as the swell had picked up, so wondered what was taking so long. Having no idea what was happening on the beach. Col was able to get the tailer hooked back up to the car again and move to a different spot to put the trailer in. We could then push the boat up to the triler and hook the winch strap onto it and winch it up. The rest of it went smoothly. The trailer looks a little battered, the brake lever is bent and the master cylinder cap is smashed, but luckily no brake fluid is leaking! Col checked underneath the car and it all looks ok.

So we headed back home and each of us cleaned one of the squid and guess what we are having for dinner?! We packed up the boat and Col said that I was a good ‘fishing buddy’ and I was chuffed. This is a big compliment and I guess I was worried that Col has to do the lion’s share of the work as I am a fishing newbie. So for Col to say I am a good ‘fishing buddy’ means a lot

And to cap of the post, here are some more beautiful pics that Col took of some native flowers around the camp ground.

Col and I decided to go for a nice leisurely walk around Lucky Bay today.  We think it is only about 2km long, but it took us about 2 hours in total to walk.  There was a look out at the end of it and a couple of beautiful small bays set among some rocky outcrops.  We didn’t take the cameras today unfortunately, so need to walk it again before we leave as it was really beautiful.  There were heaps of baby cockles along the shore too, but none that were sizable for bait.

An afternoon of cross stitch and video editing (I was doing the cross stitch and Col the video editing, in case you were wondering).  We also completed one of the Brain Waves quizzes out of the Advertiser (thanks Erin for donating a heap of them.  I am keeping track of scores and where we completed them.  Classified info though.  I have kept some for us to all do when you get to Margaret River!!).

This is our backdrop from the place where we drive to each night to get internet connection.  Not a bad view!!

So it has now been a month on the road and we are starting to settle into a routine and really loving life. You can feel the stress ebbing away.

Today is my son and daughter-in-laws 2 year wedding anniversary – congratulations guys! Steff we love having you as part of our family. Sam, you did well picking your wife, she is a keeper for sure. Sending you both lots of love.

This morning I woke up at 5.30am because I forgot to close the vents and the van had filled up with light. So at 6am I decided to get up and go for a walk/run around Lucky Bay. It was so beautiful, the bay was filled with sea mist but I couldn’t capture a good photo of it because the sun was facing me. I only saw 2 other people on the beach this morning, so it felt like I had it all to myself. I had one of those moments where I felt privileged to be alive and humbled by the beauty surrounding me. Great start to the day!

We headed into Esperance as the weather was not all that great today, so thought we would take the opportunity to do a bit of shopping and some other errands.

Also for your entertainment.  Col has finished editing some videos.  If you have a toilet tent or ever plan on getting one, I highly recommend you watch this video.  It will revolutionise your world.  If you have ever tried to pack one up before, you will understand what I mean.  This technique is easy to do, easy to remember and it stays folded up so you can get the bag to put it in without it springing open on you.

Also a handy tip from Col on how to use Vacuum Bags when you are on the road and don’t have a Vacuum Cleaner.

And this one is the first video taken when we got the DJI Spark Drone back at Christies Beach Caravan Park.

We decided to go for a hike today from Lucky Bay to Thistle Cove. It was an interesting 5km round trip walk, hilly and rocky with some spectacular views.

We kept our eyes peeled for thistles, but didn’t find any.  Then read the plaque at Thistle Cove and it was named after a person.  So there are no thistles at Thistle Cove.

The photo below is a little deceptive, as this is how the hike starts, on a nice path.   The path does become rock, but that did keep the walk interesting.  It covers different terrain and is an enjoyable trek. 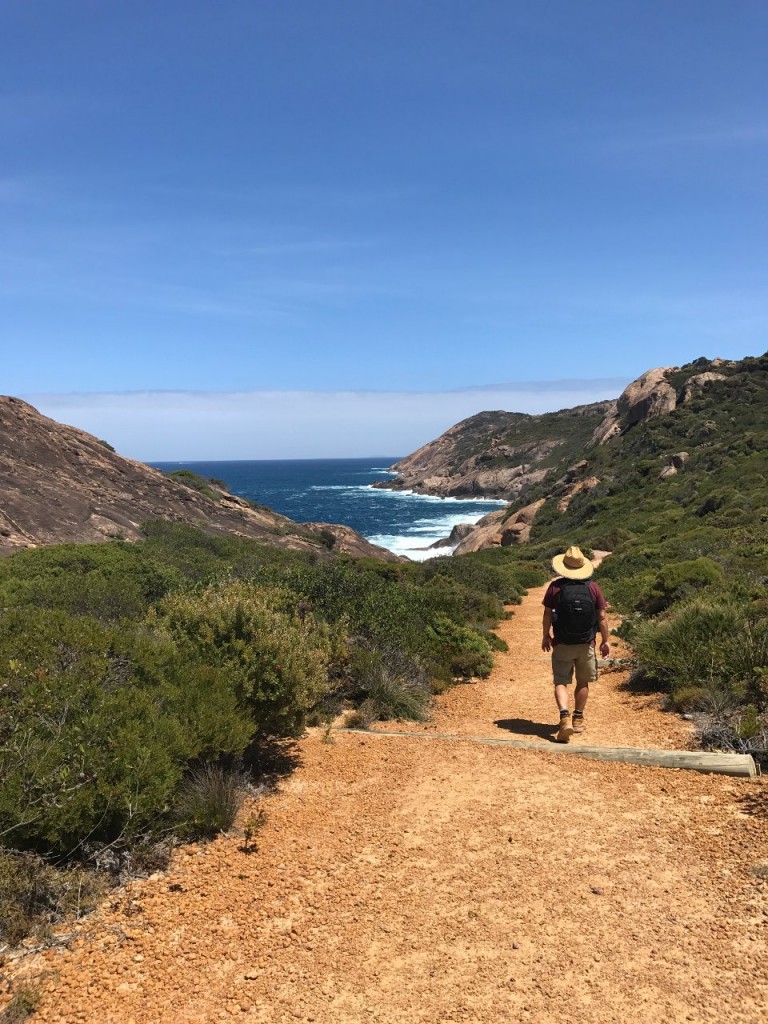 Once we got to Thistle Cove we stopped for a picnic lunch, sitting on the rocks overlooking the beach and then hiked back again.  This was our view.

We saw quite a few lizards, but thankfully no snakes!  Lots of beautiful flowers around.

Today is our last day at the Lucky Bay Campsite, so we decided to go to Cape Le Grand beach today and try out our new Boogie Boards. When we arrived it was a little on the chilly side and I was doubtful that I would get in, and if I did, even more doubtful that I would enjoy myself. But it ended up being a whole lot of fun, and once we were in I forgot about how cold the water was. The waves weren’t huge, so it was a good place to play around and practice trying to catch waves in. Col is a pro, but I am a novice.

We spent a couple of hours mucking around and trying to catch waves and had a great time. A beautiful setting to do it in too.

There weren’t many people around so again it felt a bit like a private beach.  I could get used to this!

We also started the camp pack up today. After a week of staying put we have got a whole lot of stuff out of the cars. So to lighten the load a bit for tomorrow the pack up has begun. We plan to be out of here by 9am tomorrow and have a few things to do in Esperance before heading out to Munglingup. The Munglingup (great name) Caravan Park is only a couple of hours away, so won’t be a big drive tomorrow. We only plan on staying there for a couple of days and then heading to Albany via Bremer Bay.

I have really enjoyed the Lucky Bay Campsite, but another beautiful spot is calling. The journey continues.

Welcome to our (Kris and Col's) travel blog where we will share our around Australia travel experiences. We've learned a little bit from our friends and the wider travelling community so we hope this site will give something back. In this blog you'll find our (sometimes misguided) plans, our trips and the things we learn along the way. Enjoy!!